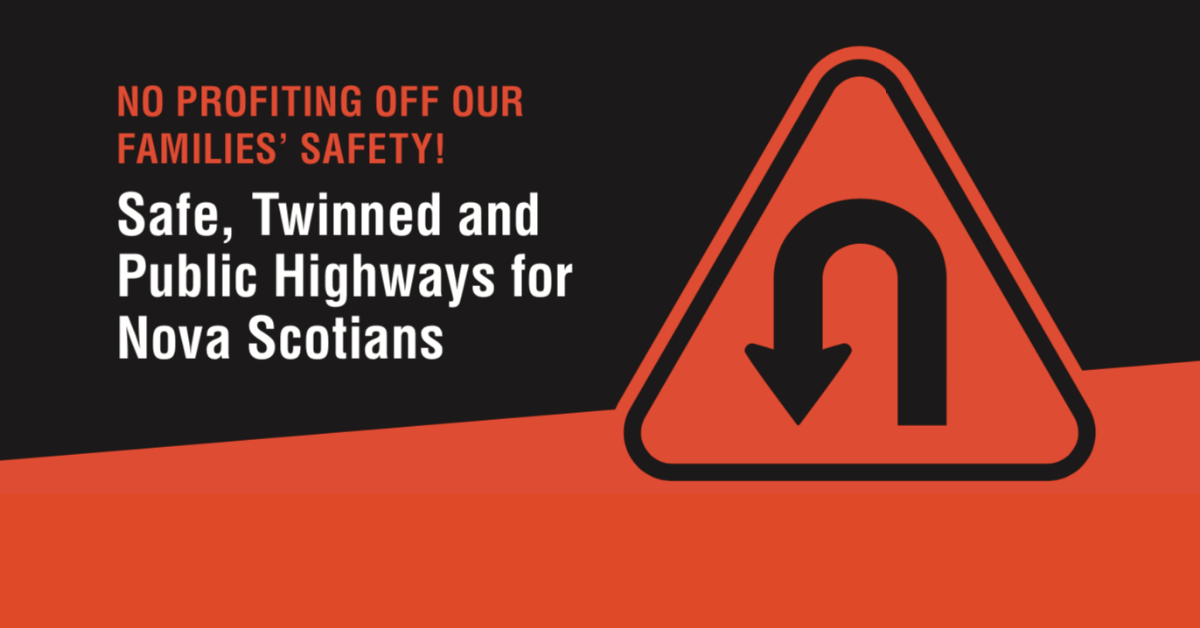 The government wants to hand over the OWNERSHIP and OPERATION of our stretch of the Northeastern corridor of Highway 104 to a private for-profit corporation.

1 : robbery committed on or near a public highway usually against travelers.
2 : excessive profit or advantage derived from a business transaction.

Don’t left private contractors drive off with our safety!

Send a message to your MLA

Tell them that we deserve the safest possible, public highway like all other highways across Nova Scotia! Your message will also be sent to:

I’m writing out of concern over the Province’s plans for how the twinned highway for Pictou-Antigonish county will be built and operated.

The Province wants to build the new twinned highway as a public-private partnership (P3) through a 30-year contract with a private consortium. This method has proven more expensive here in Nova Scotia in the case of the Cobequid Pass, and is the case in other provinces too.

I want a publicly owned and publicly maintained highway – like all other highways in Nova Scotia – that ensures government accountability and a safe twinned road.

I am concerned about the real concerns with road safety and poorer snow clearance that comes with contracting out maintenance to a for-profit company.

Important details, such as how quickly after a snowfall that roads must be cleared, have not been made public. Reports by auditor generals in other provinces have found that private companies took longer to clear roads and used significantly less salt and de-icing materials than publicly maintained roads.

This leads to slippery driving conditions which poses a hazard to my family and our community.

A publicly built and maintained highway is also cost-effective. We will spend 67% more if we build this road privately. We’re getting only 38 km of road twinned when we could twin all the way to Monastery – another 20 km!

I’m writing to ask that you prioritize the safety of our community by ensuring the new twinned highway is publicly built and publicly maintained.

Pictou-Antigonish residents have worked hard to get the government to build a safe twinned Hwy 104 between Sutherland’s River and Antigonish.

But our government is planning to SELL OFF our safety to the lowest bidder.

No profiting off our family’s safety!!